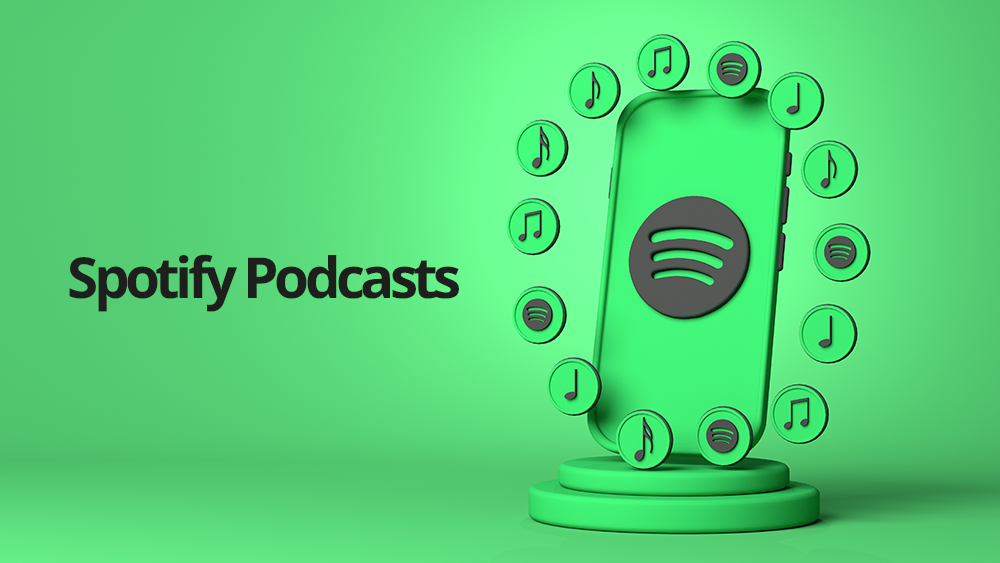 Spotify is a global leading music streaming platform. Spotify is one of the largest streaming service providers with over 422 million monthly active users (MAU), with 182 million paying subscribers as of March 2022. The platform is accessible in 183 markets worldwide, and has over 82 million tracks, including over 4 million podcast titles.

As many people know, yet some might not remember that, but podcasts as a genre originally derived from Apple’s ecosystem back in the old era of the very first iPods. iPod as an innovation was a huge leap forward from older MP3 (or even CD) music players. iPods were the first devices to offer users digital stereo sound and a massive magnetic hard drive. “Say hello to iPod. 1,000 songs in your pocket” was one of the first iPod promo slogans, pointing out that the memory capacity was the game changer for how people consumed audio content.

The word ‘podcast’ originated from a combination of words ‘iPod’ and ‘broadcast’, simply describing the audio genre of radio shows that were recorded and published on iTunes - the media platform for iPods. Podcasting genre was a combination of radio and talk shows, but with the growth of iPod user base, which was expanding exponentially, more and more podcast creators started producing their podcasts specifically as podcasts and not as a bi-product of live broadcasts. This led to the first generation of podcasters, most of whom have had relations to the actual Radio broadcasting industry or had access to the industry-grade audio recording equipment. But with the growth of the podcasting market and other streaming platforms, individual audio recording equipment and accessories became more and more affordable to the general audience, leading to the rapid growth of the community of independent podcast creators.

Thanks to the invention of podcasting and early adoption of this format, Apple started growing their podcasting community. Apple were monopolists in the podcasting market for quite a long time. But today, there are many other successful streaming platforms and the competition in the market is higher than ever, and consequently this competition applies to the podcasting industry. Apple, Spotify, Google Podcasts, TuneIn, Stitcher and Audible are the biggest players on the market. And since most podcasters, except for the biggest ones with direct contracts with platforms, were available on many services, these platforms offered more or less the same mix of authors and podcast titles. So, the competition at this stage was focused on the ease of use and technical characteristics of each platform - if they are available on all operating systems and device types, if they are well integrated with other services, and their pricing policy.

Each company has its own policy and strategy for the qualities above, but the pricing and mix of content became the most important variables in the equation of this competition. So, once Spotify had grown big enough, was making billions in revenue and went public through the direct listing on the New York Stock Exchange in 2018, the company turned its face to the podcasting market. They started experimenting with exclusives strategy, ‘buying’ podcast projects and turning them into Spotify Exclusive podcasts with high-paying contracts. The list of the most famous acquisitions includes Prince Harry and Meghan Markle, Kim Kardashian, Barack and Michelle Obama and the bizarre $200 million deal with Joe Rogan (The Joe Rogan Experience). And Spotify continues the exclusives spree, adding more and more podcasts and creating their own originals.

In 2020 Spotify launched video podcasts for the first time for select podcast creators. They kept slowly expanding access to this feature to a broader number of creators throughout the past 2 years, and they have added even more creators and countries just a few weeks ago. The last expansion of the video podcast support was backed by the announcement of a new partnership between Spotify Anchor and Riverside.fm - the platform for recording audio and video podcasts. The launch was announced on the 21st of April, 2022. This integration enables the Anchor creators to record and post video podcasts on Spotify by clicking on the Riverside icon from the Anchor interface.

Though the full benefit of enabling video feature in podcasts is not clear yet, because it’s probably more focused on additional video-ads implementation rather than user satisfaction, we need to observe the development of video podcasting to see if it’s going to be a success or failure. At the first glance, implementation of video feature might seem to ruin the original idea of podcasts being focused on audio, though it may be a smart move. The truth is that most video talk shows, such as live streams on platforms like Twitch or talk shows on YouTube, are usually played in the background, while people are busy with some other activities. So, Spotify’s video podcasting actually can possibly compete with talk shows on YouTube and Twitch, because the quality of video is not in the center of user’s attention on any platform for this genre.Either way, it’s getting obvious that video and audio production hand in hand, and you can try our Podofly to add visuals to your audio recordings and them into video content. Just follow the link below, hit the record button and start telling your story - Podofly will take you from there and show you how to use all the features it has to offer.